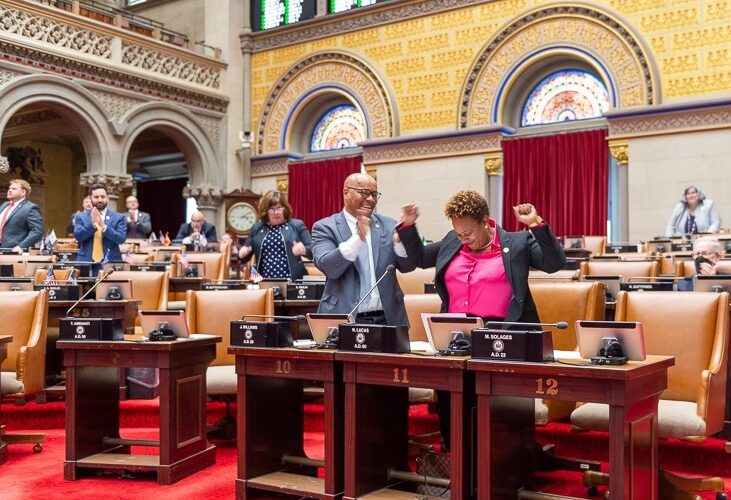 If you are familiar with the New York political scene, you’ve probably heard how hard it might be to get legislation passed on any level of government. However, newly elected Assemblywoman, Nikki Lucas, from Brooklyn’s 60th Assembly District, covering East New York, Starrett City, Brownsville, and Canarsie, was able to get a bill passed in less than 90 days of being in office.

Let’s look at her journey and how she was able to accomplish this feat.

Nikki I. Lucas was born to parents who were active participants in local politics. She earned an Associate of Arts degree in Liberal Arts from the Borough of Manhattan Community College. Nikki would then go on to study at Syracuse University.

Nikki has lived most of her adult life in East New York’s Starrett City. At a point in her life, she worked as a management consultant and ran a music store in Brooklyn. She has also worked as a recruiter for the United States Census Bureau for four years.

She is currently a New York State Assembly member from the 60th district, She assumed the office on February 17, 2022.

We could say that political activism runs in Nikki’s blood, having grown up with parents that worked hard to get things right at the community level. It was only natural for her to tow that path early on.

Having grown up in East New York, she was exposed to a lot that wasn’t right in her community, namely a lack of resources, affordable housing, jobs, equity in healthcare, and equity in education, among other issues.

This fueled her drive and advocacy for the “voiceless” and invisible East New York residents, and so she increased her network to include community and elected leaders across different levels of city, state, and federal government.

But more had to be done.

In her 30-plus year stint as a devoted advocate for seniors, youth, and small businesses in her community, she discovered that her community experienced a shortage of resources primarily because of the lack of legislation and partnerships that facilitated the free flow of resources to the community.

To Nikki, the only way to change things was to become an elected official with the power to legislate and create important partnerships that can bring resources directly to the community.

Nikki’s desire to get involved in New York politics was also born of her recognition of the fact that women are underrepresented in New York politics across the board. To increase said representation, she decided to turn things up a notch by running for elective positions in her community. Her decision was based on her conviction that women’s issues and overall community issues had to be addressed legislatively.

Nikki’s run for elected office in the past were unsuccessful, but that didn’t deter her.

She kept at it, and as fate would have it, Nikki was elected to the New York Assembly in a February 2022 Special Election, by an overwhelming margin, garnering over 80% of the vote.

Before becoming an Assemblywoman, Nikki had always implemented programs and initiatives aimed at uplifting and empowering residents of East New York and other parts of Brooklyn.

And so, upon becoming a member of the New York State Assembly, she hit the ground running, and it didn’t take long for her to get a critical legislative bill passed. She found a way to convince her colleagues about the significance of the passing of this bill.

Her job was made a little easier because other members of the Assembly understood that this piece of legislation had wide-reaching implications across communities. And so, as she describes it “I was able to talk to my colleagues who understood that this piece of legislation impacts all communities, not just mine. The debate on the floor was civil and everyone agreed that this legislation needed to pass, and it passed unanimously, with full support from Democrats and Republicans.”

So, what was this bill that enjoyed so much support?

But that is just the tip of the iceberg if Nikki’s antecedents are anything to go by. Her position as an Assemblywoman is simply a vehicle to express her passion for advocating for the needy.

What’s Next for Nikki?

Nikki must run again for her seat in the Assembly Primary in June 2022.

When asked about her outlook for the primary, Nikki stated, “honestly, I have been so consumed with my work in Albany and trying to make sure my district receives its fair share of resources, I haven’t had much time to think about running. I have a great team of volunteers and campaign supporters who are working hard to make sure we get the word out about the campaign and the Primary. I’m in the community and the people know that I am in Albany fighting for them. With that said, we are preparing to kick the campaign off, full steam ahead. We already secured endorsements from the largest labor unions in New York, representing teachers, healthcare workers and others. We will be announcing the endorsements in the coming days. But for now, I’m in Albany doing the work of the people in my community.”