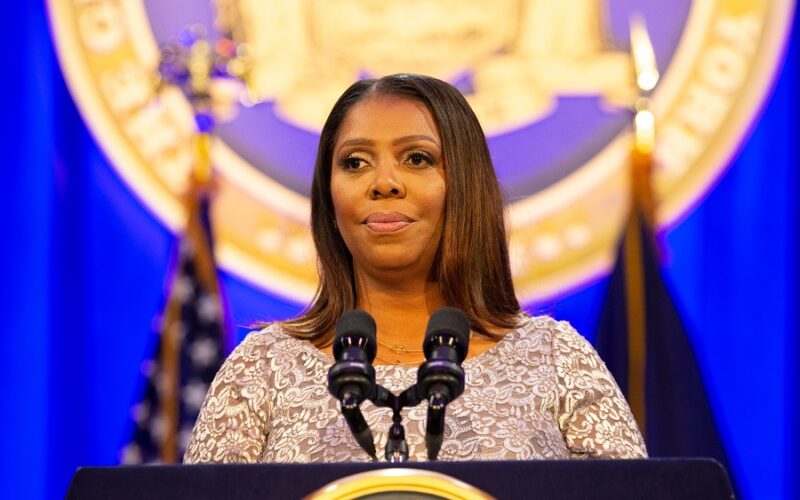 New York Attorney General Letitia James today filed a lawsuit against the New York City Police Department (NYPD) and its leadership to end its pattern of using excessive force and making false arrests against New Yorkers during peaceful protests. In the complaint, Attorney General James outlines the NYPD’s illegal and harmful conduct against New Yorkers during recent racial justice protests and for years prior, which has led to significant injuries and violated individuals’ basic right to peacefully protest. The lawsuit specifically charges the NYPD, the City of New York, Mayor Bill de Blasio, NYPD Commissioner Dermot Shea, and NYPD Chief of Department Terence Monahan with failing to address this longstanding pattern of abuse by not properly training, supervising, and disciplining officers to prevent misconduct, despite knowledge and public admission that it violated the rights of New Yorkers.

In the complaint, Attorney General James lays out dozens of examples of the NYPD’s blatant use of excessive force and other misconduct, since May 2020, including the indiscriminate, unjustified, and repeated use of batons, pepper spray, bicycles, and a crowd-control tactic known as “kettling” against peaceful protesters — all causing protesters significant physical harm. NYPD officers also unlawfully arrested legal observers, medics, and other workers performing essential services without probable cause and in direct violation of executive orders from Mayor de Blasio. The lawsuit seeks broad injunctive relief, including systemic reforms to the NYPD and the implementation of a monitor to oversee the NYPD’s policing tactics in future protests and to ensure compliance with the law.

“There is no question that the NYPD engaged in a pattern of excessive, brutal, and unlawful force against peaceful protesters,” said Attorney General James. “Over the past few months, the NYPD has repeatedly and blatantly violated the rights of New Yorkers, inflicting significant physical and psychological harm and leading to great distrust in law enforcement. With today’s lawsuit, this longstanding pattern of brutal and illegal force ends. No one is above the law — not even the individuals charged with enforcing it.”

Following the killing of George Floyd in Minneapolis, Minnesota, thousands of protesters took to the streets across New York City to protest Mr. Floyd’s death, the killing of Breonna Taylor, and the larger pattern of unarmed Black people being killed by the police.

After several evenings of violent clashes between the NYPD and protesters, Governor Andrew Cuomo called on the Office of the Attorney General (OAG) to conduct a civil investigation into police misconduct during these incidents. Since May 30, 2020, the OAG received more than 1,300 complaints and pieces of evidence through a dedicated online portal and phone and email hotlines. Attorney General James also held a three-day public hearing with testimony from more than 100 protesters, community-based organizations, elected officials, and NYPD Commissioner Shea. In addition to the public testimony, the OAG received more than 300 submissions of written testimony.

Based on the myriad of complaints received and subsequent investigation, the OAG found that from May 28, 2020 to December 11, 2020, in response to these largely peaceful protests, NYPD officers effectuated mass arrests without probable cause; unjustifiably deployed pepper spray, batons, and other force against protesters; and targeted and retaliated against First Amendment activity so frequently and pervasively as to constitute customs or usages of the NYPD.

NYPD officers unjustifiably deployed pepper spray and used batons, bikes, and other force against protesters, repeatedly violating New Yorkers’ constitutional rights and grossly violating NYPD policies regarding the use of force and the use of pepper spray. As a result of these actions, protesters experienced significant physical harm, including broken bones, gashes requiring stitches and staples, concussions, and other harm, as well as extensive psychological harm. In total, the OAG found that officers:

In one instance, Luke Hanna, who was participating in a protest at Cadman Plaza in Brooklyn on June 3, was struck in the back of the head with a baton without provocation or justification while complying with a police directive to disperse. The baton strike caused a gash so severe that Hanna required ten staples in his head to close it. Neither the officer who hit Hanna nor any other officer nearby sought or provided medical attention for Hanna’s wound, and Hanna was not arrested or charged with any crime.

In another instance, Andrew Smith, who was participating in a protest in Brooklyn on May 30, had his COVID-19 facemask pulled down without warning or cause by an officer and was pepper sprayed in the face. As a result of being pepper sprayed, Smith suffered a severe burning sensation to his eyes and face, exacerbation to eczema on the back of his neck that lasted for hours, and difficulty removing and wearing contact lenses for at least a week after the incident. Smith also suffered stress and fear that he had been exposed to COVID-19 when the officer removed his facemask. Smith was not arrested or charged with any crime and did not receive medical aid from any of the officers nearby, in violation of NYPD policy. After the incident, body-worn camera footage captured the officer who sprayed Smith asking fellow officers whether they used their pepper spray and bragging, “I took the guy’s goggles, I ripped the s— off and I used it.”

Officers arrested or detained hundreds of protesters, legal observers, medics, and others without legal justification. Officers repeatedly violated New Yorkers’ constitutional rights and applicable NYPD policies regarding crowd control and arrest procedure by arresting curfew-exempt individuals; using kettling tactics, excessive force, and threats of force to detain peaceful protesters; and detaining and arresting individuals without probable cause or suspicion that they were engaged in unlawful conduct.

In a June 4 protest in the Mott Haven neighborhood of the Bronx, officers detained 12 legal observers for purportedly violating the curfew as soon as it took effect and thereby prevented them from observing the large number of protester arrests occurring at the same time. In news footage, a member of the NYPD’s Legal Bureau can be heard shouting to other officers, “legal observers can be arrested. You’re good to go.” Officers also arrested several medics at that same protest in Mott Haven, who were in attendance solely to provide medical assistance.

At the June 4 protest in Mott Haven, officers used kettling to trap and arrest protesters. During this incident, approximately five to 10 minutes before the 8 p.m. curfew, officers halted marchers at an intersection, flanking them on both sides and preventing protesters from moving forward. Officers used their bikes to physically push the protesters, resulting in protesters being crushed together. At this time, multiple people stuck in the kettle begged officers to let them go home or leave the protest zone; however, officers refused to make space for these individuals to leave or for the protest to safely disperse.

In all, at least 249 individuals present at this intersection were arrested for violating curfew, and numerous protesters were shoved or hit with batons. The Bronx District Attorney dismissed all of the summonses issued for disorderly conduct, unlawful assembly, and violating curfew arising out of the Mott Haven protest.

Commissioner Shea later commended police conduct at Mott Haven and indicated that the kettling was part of a pre-planned tactic, stating that their execution was “nearly flawless.” Mayor de Blasio also later defended the use of kettling at the protests.

Attorney General James alleges that the City of New York, Mayor de Blasio, NYPD Commissioner Shea, and NYPD Chief of Department Monahan — in their capacities as the chief policy makers for the NYPD — failed to prevent and address the pattern or practice of excessive force and false arrests by officers against peaceful protesters in violation of the First, Fourth, and Fourteenth Amendments of the United States Constitution, as well as under the New York state Constitution and New York’s common law.

Attorney General James is seeking broad injunctive relief to address these longstanding and systemic problems at the NYPD. That relief includes, but is not limited to, installing a monitor to oversee the NYPD’s policing tactics at future protests and to oversee future compliance with the law, as well as a host of other reforms to address the problematic policies and training failures that are outlined in the complaint. Additionally, the lawsuit seeks a court order declaring that the policies and practices that the NYPD used during these protests were unlawful.

Attorney General James would like to thank former United States Attorney General Loretta Lynch; Barry Friedman, the Jacob D. Fuchsberg professor of law and the founder and faculty director of the Policing Project at the New York University School of Law; and Farhang Heydari, the executive director of the Policing Project; for their support and guidance in this ongoing investigation.