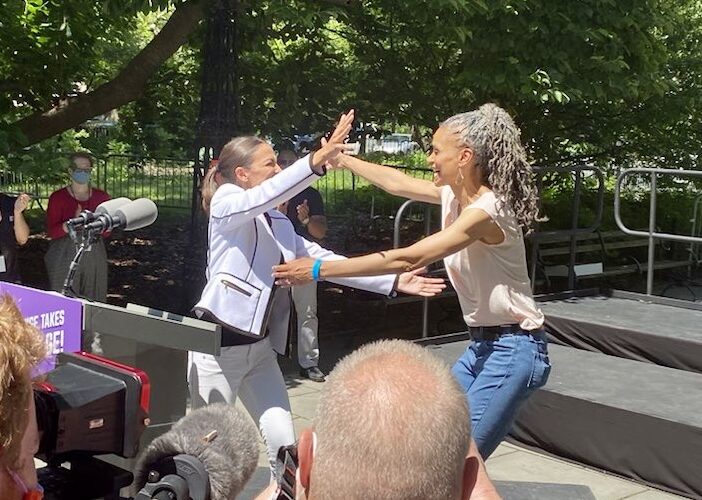 The New York City Democratic Mayoral Primary race has gotten a major shakeup just 17 days to election day and seven days to early voting, as Rep. Alexandria Ocasio-Cortez has thrown her heavy support behind Progressive candidate Maya Wiley. Speaking with Wiley outside City Hall in Manhattan, Ocasio-Cortez who is one of the most prominent left-wing leaders in the country urged voters to come together as a movement.

“If we don’t come together as a movement, we will get a New York City built by and for billionaires, and we need a city for and by working people, so we will vote for Maya No. 1,” the Congresswoman said.

Ocasio-Cortez who is also known as AOC said Wiley will be a progressive in Gracie Mansion, adding that we can’t let New York become a playground for the wealthy where working people cannot afford to live. “We’ve already tried Giuliani’s New York, and the city had also tried Bloomberg’s New York. And what that got us was a New York that was harder to afford and a New York that criminalized young people and put them into lifelong carceral cycles,” she said. “It ends now,” Ocasio-Cortez added.

No one saw the endorsement announcement coming as it took even Wiley by surprise. The congresswoman gave almost no advance notice that she intended to endorse Wiley. Ocasio-Cortez made the announcement following a scheduled rally with City Council candidates.  “I found out right before I came down here. I was extremely excited when she called me and said: ‘You’re my No. 1. Let’s talk about how we do this,” Wiley said in a brief interview after the event.

In a statement Saturday, Wiley praised Ocasio-Cortez saying that having her support means the world to her. “AOC is a fearless champion for our city in Congress. She has fought for working people, taken-on corporate greed, revolutionized the discussion on the urgent need to address climate change, and is an advocate for a more equitable economy. Nobody says and means change like her,” Wiley said. “If we want to recover from COVID we have to pay attention to all our people. I would manage the relationship with the governor the way I manage all relationships, open communication, starting with principles and purpose that meets the needs of people,” Wiley said.

To make it even better for Wiley, New York Rep. Jamaal Bowman, a progressive freshman who is close to Ms. Ocasio-Cortez, also tweeted his support for Wiley. “New York City’s next mayor needs to be a progressive fighter, ready to reimagine a New York that works for every single community. As an educator, husband, and father of three, it is my honor to endorse Maya Wiley to be our next Mayor. Let’s go!,” Bowman wrote.

Wiley said she was grateful, proud, and excited by the outpouring of progressive support including from her friend, Bowman. “It’s especially meaningful to have a former middle school principal backing my vision for our public schools. Looking forward to working with you to give our kids the brightest possible future, Jamaal!” said Wiley.

Many left-wing activists and leaders have been divided among the three progressive candidates in the mayor’s race: Scott Stringer, the city comptroller, Dianne Morales, a former nonprofit executive and Maya Wiley.

Fellow progressive candidates, Scott Stringer and Dianne Morales have each suffered controversies in recent weeks that seemed to shake the sturdy support they had up to that point. Stringer is facing a second accusation of making unwanted sexual advances almost three decades ago and has lost a number of high-profile left-wing endorsements including Bowman.

Morales is having problems in her campaign, with three of her staffers leaving, including her campaign manager.

Wiley now has the support of two of the state’s highest profile members of Congress in Ocasio-Cortez, who represents parts of Queens and the Bronx, and Rep. Hakeem Jeffries, chair of the House Democratic Caucus. The growing support by the left to back Wiley may cement her lead ahead of the other progressive candidates still in the race.