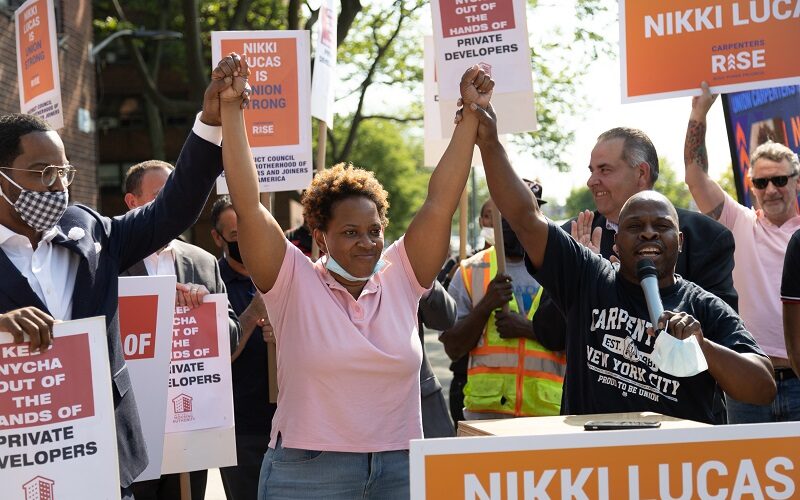 With less than a month until early voting begins for New York City’s primaries, City Council candidate Nikki Lucas strengthened her campaign yesterday with the endorsement from the Carpenters Union. District 42, which includes East New York, Brownsville, Spring Creek, Starrett City and part of Canarsie, will have the open seat from term limited Inez Barron.

Standing among a large group of union members and residents in front of East New York’s Linden Houses, Joseph Geiger, the Executive Secretary-Treasury for the New York City District Council of Carpenters urged residents to vote for Lucas. 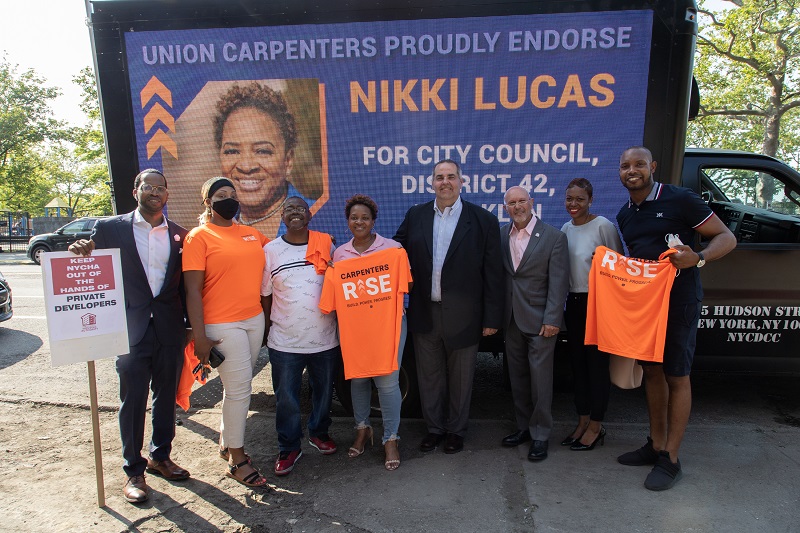 Nikki Lucas with (left to right) Joseph Geiger and Ruben Colon. In front of the digital truck.

“Nikki has the guts to call it like she sees it. She has been fearless in pushing back against attempts to privatize NYCHA [housing]. Like Nikki, we warned that RAD (Rental Assistance Demonstration) was a trojan horse that would privatize NYCHA while doing nothing to solve the real problems facing the Housing Authority. Sadly, we were right. RAD promised to make repairs better, faster and safer for the residents of NYCHA. Instead it made the very developers responsible for our affordability crisis richer while denying working men and women making the repairs a living wage. Meanwhile work-place violations, shoddy repairs and worker injuries have all risen.”

“Several developments within East New York and across the city are faced with privatization,” stated Lucas. “NYCHA came to us and said ‘It’s not really being privatized. It’s a lease.’ And that’s what they were selling to the residents. It’s a 99 year lease! That means they are privatizing. They control exactly what is happening with the residents. They will also move a unit out of an affordable state, which is Section 9, into the ability for people to get Section 8 vouchers. We are at risk of losing affordability. Once that unit becomes Section 8 and someone moves out, it will go to the fair market.”

For Linden Houses resident Ross Sloan, change can’t come soon enough. For over 40 years Sloan has seen conditions around the community grow increasingly worse. “We have many rats, a ton of rats around the grounds. We have elevators breaking down and trash around the grounds, tons of trash. There are people out here who don’t clean up stuff and start fires. For my apartment, some repairs haven’t been done like the floors. You put in a repair ticket. You may wait around two weeks for some tickets and the rest you’ll never get a response from.”

Andy Holloway, who has lived in the Linden Houses for 48 years agreed with Sloan’s assessment.

“We will have an inspector come to see what needs to be repaired then won’t hear or see anything get done. We had one come at least a month ago. Sometimes we have good results from repair tickets and other times nothing.”

“NYCHA is putting residents and the workers into unsafe conditions, has not provided work opportunities to the residents, and has had no talk of prevailing wages,” stated Lucas. “This is unacceptable and only happens over and over and over again in our communities of black and brown people! What you’re seeing here today are people who can live a quality life and raise their family because it’s the union that started them from the bottom and moved them up. It’s teaching them and giving them extraordinary skill sets so they can get health insurance and make a sustainable wage. We need to make sure we are giving people quality services, that we are retrofitting these developments so people can live quality lives, we are providing jobs that have sustainable wages and we are union strong.”

Running with the pledge of “Real Solutions for Change,” Lucas seeks to move the district far from the ways of past council members.

“We’ve had the same politicians swapping seats for 20 years and we’re still living in the same conditions we had 20 years ago. We’re still living with trash across our community, our buildings and infrastructure have been sold for cheap labor, we are not employing people within our district and we are not providing opportunities. If you’re looking to move towards leadership that is proactive, that is concerned with this community and that is going to move us forward then I’m asking you to join this movement and vote for Nikki Lucas.”